Have you ever crossed paths with someone who just seems to make the world a bit brighter? I mean those not-so-well-known folks who intermittently cross your path and leave you with a smile on your face and a lightness in your heart. 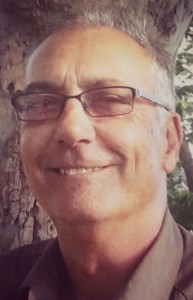 At my old house, Rick the UPS guy was one of these souls. I was lucky enough to be on his route, so every now and again, when I had ordered something, he would pull up in the drive. It was always a pleasure to be in his presence because he seemed genuinely happy. Truly joy-filled. Even on the coldest days, he wore the uniform brown shorts and drove with the door open. He always had his signature cigar in his mouth and a moment to chat and check in. I don’t know how he managed to do all his deliveries, because I’m sure he treated everyone with the same convivial loveliness.

And then there were the dogs. Just like Pavlov’s canines, as soon as they heard the truck, all four would congregate at the door knowing full well there were treats to be had, and Rick loved to dole them out.

He rolled up on the drive about a week after my husband died and I happened to be in the breezeway. There was an abundance of flowers on the table and he whistled as he said, “Wow, something special must be going on around here.” I sighed and told him what happened. Ever the gentleman, he pulled the cigar out of his mouth, gave me a hug and then pulled out a chair for me. We sat for a while and he shared some personal stories about his love of jazz and his children. He made me laugh and, of course, I cried.

“I can’t imagine what you’re going through, but I’m pulling for you,” he said as he got up to leave. All told, he sat there with me for half an hour, a long while to be off the delivery route, but he never let on that it made any difference to him. For the next four months, while we prepared to move, he always asked how things were going. I happened to see him the day before we left and he gave me a big hug and said, “You take good care of yourself and those kids and remember, I’m pulling for you.”

I found out this weekend that while driving up highway 395 last week, on his way to a fishing trip, Rick Story was hit head on by an alleged drunk driver (I’m told it is a second offense.) He died at the scene.

I sat in disbelief when I heard it. I still can’t quite bring it into my reality. How is it possible that this jovial, kind-hearted human can be gone just like that? I truly struggle with these senseless things that happen in the world. Even after all I have been through, I still can’t get used to the way we recklessly intersect one another’s lives and wreak irrevocable damage.

It’s strange because I never really knew much about him, but he was just one of those humans — the really good kind that left a trail of radiant happiness wherever he went. His death reminds me to live the hell out of each moment. His life reminds me that kindness is a priceless gift.

Wherever he is, I hope he knows I am pulling for his family.

← The Voice Of Intuition: Confirmation from Genetic Testing
Strength and Love: Homecoming by Linda Reuther →