The Secret Life of Secrets: When to Tell a Secret?

“Lying, by omission or commission, is a bad idea. I cannot shake my dependency on the white lie, because I was brought up to be nice. And I’ve never figured out the nice way to say, ‘I’d rather stick a fork in my eye than come to your house for dinner.’ But the meaningful lie, the kind that involves being untruthful or deceitful about important stuff to those you love, is like poison. Telling the truth hurts, but it doesn’t kill. Lying kills love.” Amy Bloom 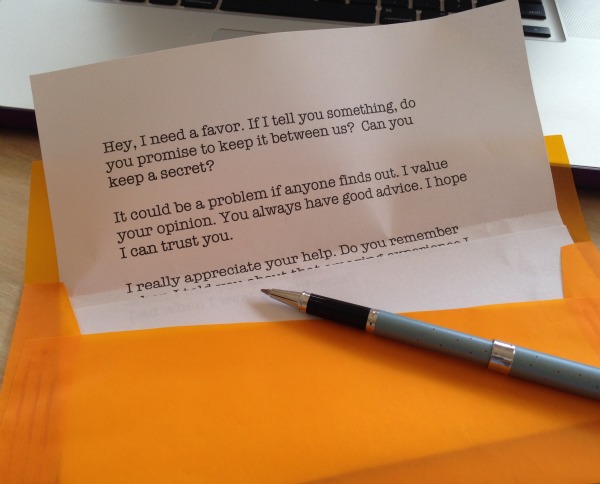 I have been pondering secrets and lies — those quiet forces that ebb and flow through our lives, sometimes as effortlessly as the air we breathe. I’m not waxing poetic on the morality of them. Some are most likely necessary; not everyone can handle the truth and some people just plain don’t want to know it.

It’s more a curiosity about human nature and the ways in which we complicate an existence that could be really simple and lovely.

When I asked my 18-year-old son what his take on secrets was, he said, “Well, everybody has them. The truth is hard for people. People lie about the silliest things because society teaches us to be dishonest. But it is so refreshing when you meet a truly honest person. Someone who can tell it like it really is.”

Bravo. I hope he can be refreshing, always.

A few years back, my other son was attending a private school and there was a student who was causing problems. By a strange twist of fate, a friend of mine had very extensive knowledge of this child in a professional capacity. His background was disturbing, to say the least. When I approached the director of the school, he was embarrassed because the history had been hidden from him. He told me he would “handle things” but, could I please keep this quiet because it would be awful if the other parents found out.

So there I was, caught between trying to protect my son and being a trouble-making parent. Awkward moment. In essence, I was asked to protect the director by keeping a secret. So, I opted for the quiet role, hoping he would be true to his word, which he wasn’t. I have always regretted my choice and often wondered what would have happened if I had chosen to press matters and share the inconvenient secret. I’m fairly certain the outcome would not have been favorable to my son.

Over the last couple years, I have come to understand that a few, no, many people knew about my husband’s double life. Some said they thought we had a Bill and Hilary style relationship. We didn’t. Some wanted to stay out of the fray, which I respect. Others actively participated: running interference and providing cover. None of them spoke up.

Now, I can’t say what I would have done if I had been told way back when, because my frame of mind was very different. I lived in a space where I thought if I followed certain rules, life would go a certain way. I was afraid of making mistakes and that limited me in a very big way. My desire to fit in to a certain kind of life, and keep my family in tact, quite possibly blinded me to obvious truths right in front of me, and had someone come along and threatened that existence, I may have rejected it.

All the same, and even though it was no one’s responsibility, I still wish someone had told me.

Perhaps I am searching for the distinction between being a busy body and a decent human being. If someone says, “This is a secret, please don’t tell anyone,” but their conduct is harmful to another human, where does the responsibility fall — with being the keeper of the secret, or the well being of the other person?

I briefly turned on the TV the other day as Katie Couric was interviewing the founder of Ashley Madison, a site devoted to “discreet” affairs between married people. Dr. Phil was sitting shotgun to comment on the morality factor.

Boasting seventeen million members, it is a veritable hive of sticky secrets.

The founder justifies the demand by saying that sex and marriage are different, and on his site, people are up front about their intentions with each other. This is a “discreet affair” that is meant to stay that way, and both parties understand the context of the encounter.

I suppose one can applaud their honesty, although I wouldn’t call it refreshing.

Personally, I find myself wondering about the other half of the equation — the seventeen million partners obliviously living on the other side of that discretion.

Do you agree with Amy Bloom that the meaningful lie is like poison? If someone told you your life was not the way you think it is, do you think you would be willing to examine the truth?

← Talking About Suicide for Healing
On Falling Down, Getting Back Up and Being Enough →

2 comments for “The Secret Life of Secrets: When to Tell a Secret?”