The Beauty of the Mother and Child Bond

In 1963, when I was born, it was decidedly un-hip to be pregnant and unmarried, so at the tender age of 3 months, I was given up for adoption.

I am one of those lucky adoptees in that my birth mother hired a private detective to find me. I was 30 and pregnant with my second child. The first question I asked her was, “Did you ever think about me?” as I patted my growing 7-months-pregnant belly. It was a question I wondered about as a child, and as it came out of my mouth, it felt like it was coming directly from the heart of the little girl I once was.

There is something sacred about being found when you have been given away, and the fact that she searched for me, signaled that she had wanted me on some level. It soothed the part of me that felt abandoned that had haunted my entire life, despite having two parents who loved me.

Just a year earlier, when my firstborn turned 3 months old, I would stare at her and ponder what my birth mother must have endured handing a child over to an anonymous couple, after signing documents that sealed me behind a bureaucratic vault.

I would rather have had my heart ripped out by the natives in Apocalypto. 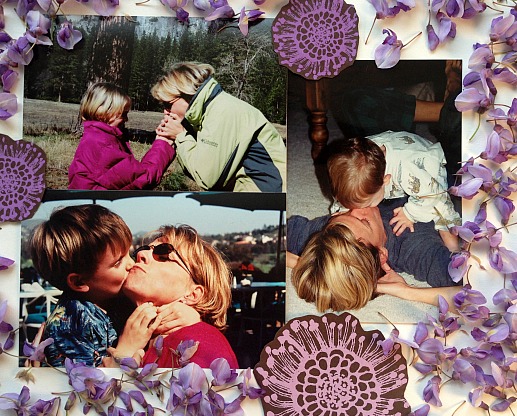 In my early 20s, I half-heartedly searched for her, but I was frightened by the prospect of rejection, having met some despondent individuals in ALMA who had been rebuffed by their mothers. Perhaps the energetic burden of having given a child away was simply too overwhelming to face. Adoption is, after all, an intimate exchange of energy, bound in hope and despair and blind faith.

Stepping back into that space, and wading into those unresolved emotions of the past, takes a mighty brave soul. Not doing so, however, leaves the other soul somewhat untethered.

It is a terrifying endeavor to search for the woman who birthed you into being. Like a moth to a flame, one is drawn in by the hope of connection and belonging, and equally repelled by the fear of rejection. Added to that was the struggle of feeling disloyal to my parents.

In The Brain on Love, Diane Ackerman writes:

“Brain scans show synchrony between the brains of mother and child; but what they can’t show is the internal bond that belongs to neither alone, a fusion in which the self feels so permeable it doesn’t matter whose body is whose. Wordlessly, relying on the heart’s semaphores, the mother says all an infant needs to hear, communicating through eyes, face and voice. Thanks to advances in neuroimaging, we now have evidence that a baby’s first attachments imprint its brain. The patterns of a lifetime’s behaviors, thoughts, self-regard and choice of sweethearts all begin in this crucible.”

Perhaps the connection with my birth mother was a way to make sense of those imprints made in the first few months of life. Vital pieces of missing information that completed me in some way. When I met her, I remember feeling as though I now held all the parts of myself in one place and they were no longer scattered out in the universe or locked away in secret files.

Having the information expanded my perspective and opened my heart.

In part, our lives are a collection of experiences and memories, and we have endless opportunities to spread them out before us and make sense of what we find. Have you ever taken apart a memory you hold dear, one that might be holding you back or creating friction, with the intention to open up to bigger possibilities?

← On Courage, Casseroles and Expressing Sympathy After a Suicide
Self Healing Techniques: Tapping Your Way Through Resistance →

4 comments for “The Beauty of the Mother and Child Bond”