Pets as Therapy: Life Transitions and Healing with Pets

I have three Cavalier King Charles Spaniels’ swirling under my feet every day. Trusty companions that follow me through the house: up and down the stairs, around the garden, and in and out of the bathroom and kitchen. They would prefer that I sit on the couch all day where they can lay on top of me.

I used to have four, but Jasper died three years ago, just prior to the catastrophe. Perhaps he knew what lay ahead. It was the beginning of an intimate encounter with death that year. A month later, my two bunnies suddenly died, then, my husband, and ten months later, my mother.

Quite an initiation. I felt as though the universe was pressing my face up against a window into a world I had never noticed before. It opened my eyes to a different way of being, and made me realize the proximity of death was much closer than I liked to imagine.

The dogs knew something was amiss right away. I often wondered what their dog brains made of the rapidly changing environment, but I know what their stomachs made of everything: diarrhea. Everywhere. Nothing was spared. I had to take them to the vet for canine Xanax, Imodium and a brief vacation from the upset.

It came on the heels of a particularly awful morning when the entire laundry room floor resembled a swamp. I almost went over the edge, so my vet kindly stepped in.

The first move was the worst for all of us, because it was a transition from the known to the unknown, I suppose. We left behind almost everything we knew and loved and moved into uncharted territory. I couldn’t explain this to the dogs. I could barely explain it to my children, and they spoke English.

There is something incredibly comforting about the presence of dogs in our ever-changing life. It reminds me of goodness in the past, and the possibility of that in the future. 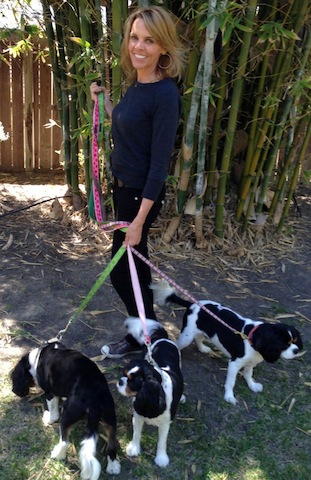 It took a while for them to settle in to the new house and thank goodness, the last two moves have been much less traumatic. They see the boxes start to stack up and seem to know that they are coming along, wherever we go.

Have your pet’s made surviving life’s challenges easier?

1 comment for “Pets as Therapy: Life Transitions and Healing with Pets”