On Getting Out Of Your Own Way And Succeeding 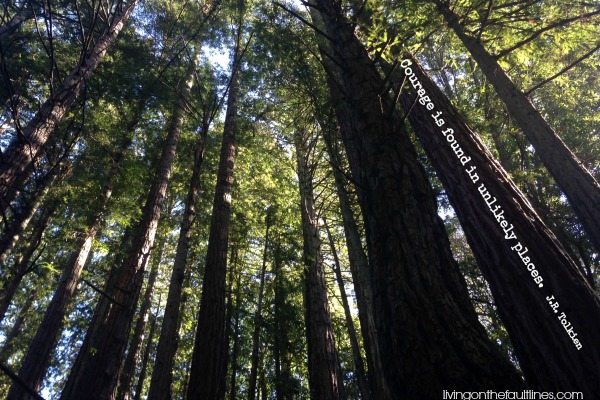 I went to Santa Cruz for a visit with my Sophomore son last weekend. College doesn’t seem to have changed much since I was there  many years ago, except everyone now has their nose in a Smartphone. The food in the pantry is a bit different and I don’t remember my house full of girls being quite as dirty as this house full of boys. It seems like a living science experiment – I’m fairly certain that nothing has been cleaned since last Summer when I moved him in.

Nevertheless, the student vibe feels much the same, with everyone riding bikes and hauling book bags.

My son is an avid fan of chemistry and math, two of my weakest subjects in school. He was enthusiastically showing me chemical equations that are diagramed all over papers taped on his wall. I pretended to know what they meant, but it might as well have been another language. It made me smile to see his enthusiasm and reminded me of his younger self, the one who knew the name of every dinosaur and was intent on becoming a Paleontologist.

I don’t remember when his passion for dinosaurs began to wane and then disappeared. Perhaps he realized there were bigger opportunities out there for a Chemistry major than a Paleontologist. Careers aside, seeing him devour and share every morsel of chemistry possibilities with delight, is more than enough for me at the moment.

We walked along the coast, toured the campus where he attends class and works, then ventured on a long hike down into a gorgeous forest. We even managed to see four Banana Slugs, odd little yellow creatures, that somehow managed to become the school mascot.

He works in a lab on campus, which was the result of an interesting process I suggested to him. One I have been trying to put into practice myself, but I am better at telling people what they need to do, rather than actually applying it myself.

It was something I read in, The Education of Millionaires by Michael Ellsberg, a book that showcases people succeeding in the world who haven’t followed the traditional college education route. Tim Ferris has a version of this process as well. In it, the author suggests an interesting practice that I shared with my son who, after some encouragement and prompting by me, actually did it and achieved amazing results.

I told him to research interesting Chemistry people doing things he thought he might want to pursue and then write them a genuine letter of interest in their work and express a desire to meet with them to learn more.

I stipulated that the letter had to come from a place of authenticity and, if possible, to find an interesting angle of how he might contribute to their work.

He procrastinated for a month (I know where he got this gene) and then finally took the leap. Within a couple weeks, he had sent out ten letters, had quite a few replies as well as meetings, and ended up with a job in one of the top labs on campus.

All of these folks expressed surprise and admiration that a Sophomore had taken the initiative to write to them. Apparently, this has not been done before.

Isn’t it amazing how such a simple thing can yield such big results? And yet, despite his success, he cannot convince his roommates to follow his lead.

I’m always amazed by the ways in which we humans get in our own way, myself included.

Do you get in your own way?

← Healing Trauma: First Aid for the Soul
Fear: What’s Holding You Back →