Fear: What’s Holding You Back 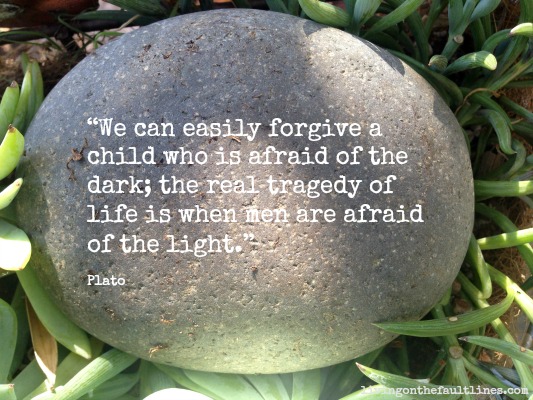 When I was a little girl, around the age of six or seven, I was terrified of the dark. I remember the swell of anxiety in my belly after bath time when I knew “lights off” was imminent. Climbing into bed, I would lay back and watch as one of my parents reached for the light switch while simultaneously closing the door, and left me alone with the wilds of my imagination.

I was convinced that as soon as the lights were out, my floor became a mass of writing black snakes and I developed a complicated routine to manage my fear of the slimy creatures beneath me and survive the night.

I pulled my covers up over my head and my eyes had to remain closed – it was certain death if the snakes saw my eyeballs. Every part of my body had to be on top of the mattress, especially my toes, or they would be eaten.

I still refuse to have my feet hanging off the bed. That’s the power of this childhood fear.

It was imperative that I become completely still. As long as I was still, I felt a certain safety. Shallow breathing was a must, lest the snakes hear me. Once I had all the parameters in place, I would lay there motionless and silent until I fell asleep. I was too terrified to get up and use the bathroom, so I often wet the bed, much to my mother’s dismay.

I begged my mother for a flashlight. I pleaded to have the lights on. Both requests were denied and poo-pooed as unnecessary.

I don’t know exactly where or why this fear took over me but the imaginary horrors that could happen in the space between my bed and the light switch became legendary in my mind. They leaked out all over my life, into the classroom where I hid behind other children in a desperate attempt to not be seen. Into the way I remained quiet when I needed something.

A frightened child, I just wanted a light and to have my fears assuaged. Instead, I was left to my own devices, and devise I did.

As I dismantle the fragments of my past, the parts that now make up the whole, I am seeing more and more now the way in which my past shaped my present. It isn’t all bad, but neither is it good when I see how some of these things have left me frozen me in place.

I’m no longer afraid of the dark, though that fear did stay with me for a very long time. I am afraid of other things, and I have tried to apply the same tactics I did when I attempted to manage the darkness.

I tend to freeze and become paralyzed. I stop breathing. None of this is terribly useful for adult size problems.

As I get older, and more willing to look in the dark places, I am sensing more and more of the human beneath the devices. I catch glimpses of the young girl who did her best to adapt to the terrain and I see a woman clinging to ways that now need to be released in order to become the human I was meant to be.

What about you. What do you cling to that kept you safe in childhood, but no longer serves your best interest?

May your journey be safe and protected, always.

← On Getting Out Of Your Own Way And Succeeding
Simple, Good Food: Japanese Meatballs And Korean Slaw →