Healing with Art: Sending Beneficent Vibrations to the Universe

I had an idea to make a spin off of prayer flags because I have always loved them and hope to one day go to the Himalayas and see them blowing their beautiful messages into the world.

Traditionally, prayer flags are used to promote peace, compassion, strength, and wisdom. The flags do not carry prayers to gods, which is a common misconception; rather, the Tibetans believe the prayers and mantras will be blown by the wind to spread the good will and compassion into all pervading space. Therefore, prayer flags are thought to bring benefit to all. —Wikipedia

In the meantime, I thought it would be an interesting way to add both color and good energy around my home. It was extraordinarily cold here in San Diego last weekend, so with the fire burning, my friend Suzani and I spent the afternoon cutting triangles to create this vision of mine. Mind you neither one of us is a seamstress, we just kind of made it up as we went along. This type of creative work produced uneven and mismatched flags, but no matter, it was just being in the moment and allowing the process to flow that was important. 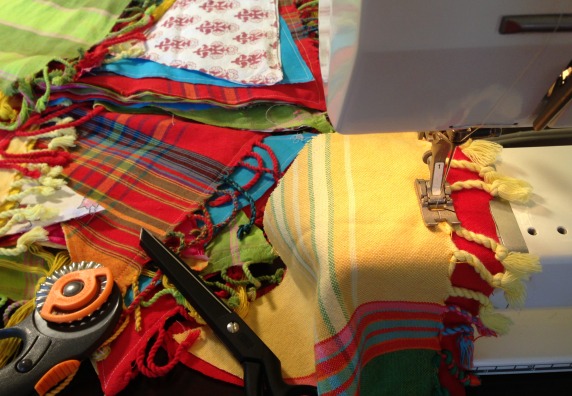 An hour in, I went into the garage to get the ironing board and discovered the water heater gushing all over the garage. It had clearly been spewing its contents for a while, and the valve on the top spun endlessly so I couldn’t shut it off.

I think of myself as being handy, but I hadn’t taken the time to locate the water main in our new home. And, as I was running around trying to locate the valve, our five collective dogs escaped. I tried to chase them back into the house, but of course they all ran out into the street in opposite directions. Meanwhile, the water was seeping into all the drywall and concrete crevices.

After locating the valve and shutting it down, it becomes apparent that there wouldn’t be hot water for the rest of the day, which is too bad because, of course, I hadn’t showered that morning.

At least the water crisis had been averted.

The fabric I used for the flags came from a collection of old tablecloths, napkins, pajamas, beach wraps and kid’s childhood pillowcases. I suppose, in a way, this is another repurposing project, like my jewelry rework.

I was up until 11pm sewing, and in my mind I was thinking how ridiculous this project was and swearing I would never do it again. Then, I woke up and cast fresh eyes on the finished streamer, and hung it up. Later that day, I was back at the sewing machine doing round two, only now I had the formula, so it was a much smoother process.

I exercised some creative liberty and veered off the traditional square prayer flag shape. 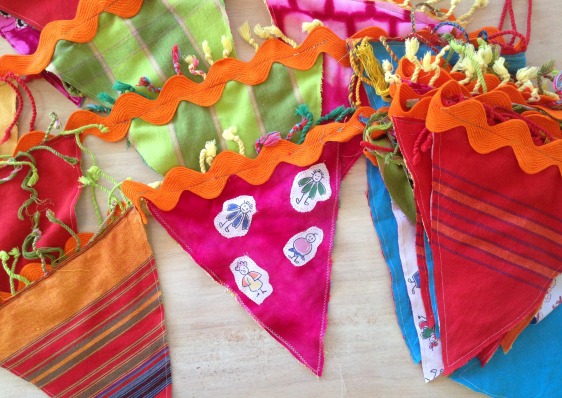 There are no words on them like true Tibetan prayer flags. Rather, they are infused with intention and love. I think it would be very cool to follow tradition and create an entire streamer of flags inscribed with all the goodness I have learned from my journey. Certainly, one of them would say:

Nothing is happening to you, it is all happening for you.

I am grateful to have colorful adornment rather than bags of random fabric in the garage, and sewing late into the night was worth the colorful ceiling in my office. 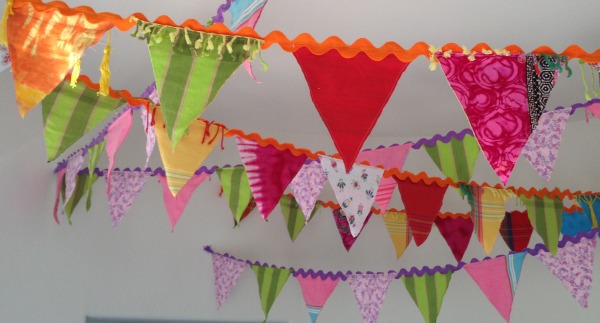 We have been trying to think of a name for them. Happiness Bunting? Healing Flags? Hopeful Message Streamer?

1 comment for “Healing with Art: Sending Beneficent Vibrations to the Universe”