Forgiving Yourself Is the New Black 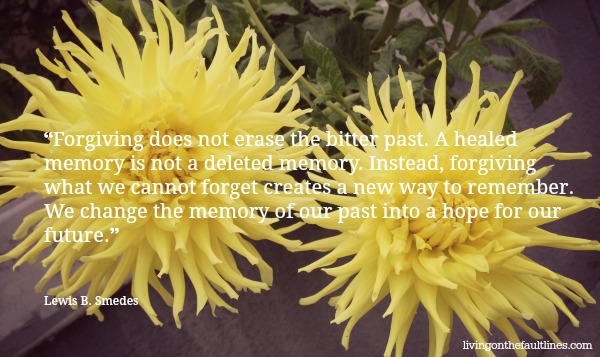 Forgiveness is the new black, or at least it seems to be on everyone’s lips these days. It is something I think upon because people often ask if I have forgiven my husband. Every now and again, I notice a judgmental edge to the tone in the question, as though I’m not worthy if I haven’t reached the supreme state of forgiveness.

I believe forgiveness is about you, not the person who wronged you, and to truly forgive, we must begin with a clear definition of what that means to us and understand the why behind it. The answers to those questions will then pave the way to forgiveness and being forgiven.

To me, forgiveness is a fiery, potent brew of compassion, understanding, love and releasing the energy of the past to be repurposed. There is absolutely nothing quiet about it. Your forgiveness will look nothing like my forgiveness, and that is ok. One of the most interesting explanations I’ve heard is that forgiveness is giving up on the hope for a better past, which is true in many ways, but I think it goes much deeper.

When I was in high school, I did something awful that I regret to this day. There was this teacher that everyone loved. He was that guy, the one who had a posse of adoring students and just seemed to get life for us teenagers. His class was a temple of sacred instruction, and to be in the circle of his favor was magical. I was in that circle and we had a relationship based on mutual adoration. I worked incredibly hard to do well for him and basked in the attention he showered upon me.

I was fortunate to be in his physiology class and then, a year later, chemistry. While I flourished and excelled in physiology, I struggled and floundered in chemistry. I tried my darndest to understand the bloody periodic table and master chemical equations, but the concepts were beyond my creative right-brain orientation. My grades began to slide down the slippery slope, nearing the border of not passing.

He trusted me so much that I was assigned to be his assistant and do special tasks, including recording test and homework scores into his grade book. I don’t remember exactly why I made the decision to alter my grades, but it happened. I can offer up excuses that I was under a lot of pressure to get straight A’s and my mother refused to get me a tutor, but at the end of the day, I made a choice that severed a very special relationship. When he discovered what I had done, I become persona non grata.

Since high school, I have written to him three times begging forgiveness and trying to explain myself and apologize, but I never heard a word back.

What I really wanted was for him to write and tell me everything was ok and that he still thought highly of me, which of course was not going to happen. I would have taken, “You broke my heart.” But sometimes we do things that go beyond the limitations of others, and I have to honor that my actions went beyond his and try to find my way to forgiving myself for abusing his trust.

It has been the same with my husband, who insisted that if I simply forgave him, everything would be ok. What he didn’t understand was that I needed to forgive myself and explore the multitude of ways I had abandoned myself over the years in our marriage. All the times I allowed him to talk me out of the truth I knew in my heart, and accept his version, to keep the peace. Every instance I folded, instead of taking a stand for myself.

I don’t think we can authentically set foot on the forgiving path until we have forgiven ourselves. Once that happens, it becomes a continuous journey of unraveling the experiences of our past and allowing the strands to be rewoven into a more purposeful and beautiful cloth.

Here is a great article about forgiveness by Jack Kornfield.

Sending love your way as we begin this 2014 holiday season. I hope yours is full of the blessings of forgiveness and joyful laughter, and that you feel cherished and connected in every way.

4 comments for “Forgiving Yourself Is the New Black”