Dealing with Grief and Gracefully Disengaging from Blame

I originally posted this a year ago but I recently read an article on the Huffington Post discussing the issue of blame and thought I would repost since it seems to be an ongoing problem.

I have had some interesting and difficult conversations over the last two years. I thought I would share this one in particular, in case you are encountering similar circumstances, because it has taken me a long while to understand the reasons and complex nature of blame. 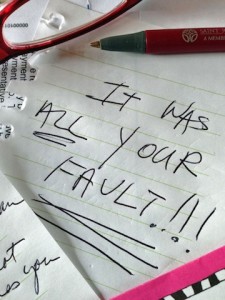 I recently re-visited the coroner’s office, because when I was there at four in the morning, just a few hours after my husband’s death, things were in complete pandemonium. I returned seeking clarity, I suppose.

The memories of that night are a surreal mixture of bits and pieces. I clearly remember the car ride, but not entering the building. The room is etched in my memory, but not the sleek and modern exterior of the building, which defies the grisly nature of the facility.

The trauma of that evening was complicated by the fact that I was impersonated. The first time I called to inquire about my husband, I was denied information. The Coroner believed she had already spoken to me so I had to convince her otherwise. You can’t imagine the confusion.

When I entered the building the other day, I asked the clerk, who was entombed behind an extraordinarily thick wall of glass, if she minded whether I just sat in the room where I had learned the details of my husband’s death.

I must have seemed odd, or perhaps suspicious, because suddenly the Chaplain was beside me. He wasn’t present that night, so it was interesting to hear his perspective on my experience. After recounting the events leading up to the suicide, our conversation circled around to blame.

He helped me to make sense of the seemingly senseless. In his position, he deals with blame on a daily basis, and he asserted that it is not limited to suicide; he witnesses this quirk of human nature in all types of death. He offered that, in many cases, people cannot handle their own pain or simply do not want to deal with it.

Blame is a way of discharging pain immediately and diverting attention elsewhere.

Being blamed for my husband’s death in the midst of handling such a major crisis was excruciatingly painful. My attorney begged me to ignore it. My therapist implored me to turn away. I couldn’t help it. I was compelled to defend myself and protect my children. For the first year, the accusations seeped into my being like an endless rain of acid, compounding my grief and robbing me of precious mental resources.

I am not a religious person, but the Chaplain’s knowledge and perspective helped me to better understand blame.  Although I think it is a cowardly way to handle pain, understanding the motives has been tremendously helpful.

Another helpful practice: don’t take anything personally. A brilliant bit of Toltec wisdom from Don Miguel Ruiz’s The Four Agreements.

If you are in the murky depths of being blamed so someone else can avoid their own demons, perhaps this will give you the permission you need to disengage. I hope the professional weight of the Chaplain’s words offer you a protective shield of armor. It is something I wish I had understood sooner, so I could have been more present for my children and their grief.

← End of Life Planning: The Importance of Being a Prepared Optimist
Reminders from the Universe: Don’t Give Up →

7 comments for “Dealing with Grief and Gracefully Disengaging from Blame”