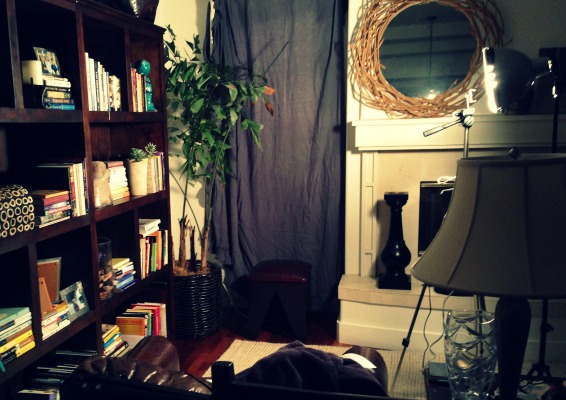 I have been working on creating a tele-seminar. The photo above is my living room, rearranged and full of the various components necessary to create videos. These things take a while to organize, and more time and courage than one might imagine. They require a lot of back talk to the inner critic as well, because putting any kind of work out into the world can attract criticism, both real and imaginary.

Gathering all the information to host this kind of event is a job in and of itself, but then there is the marketing, an entirely different matter. Some of the marketing will be done through video which requires a brand new skill set, and upended living room. On more than one occasion, this new work has given me pause and made me ponder what I am doing. I enjoy learning new things, but it is sometimes such an uncomfortable stretch to do so.

On Saturday, after many, many takes during the preceding week, I had the grand idea that this would be the day that I would finally capture “the” video. Alas, the universe had another idea. As I was about to start recording, the lawn and leaf blower brigade showed up on my street to begin their bi-weekly clean up of the neighborhood. My first video was lined up just as the first mower went on, followed by a dog barking at said mower.

I thought I could capture a video in between the noise but had to learn the hard way that patience is often required with this kind of work. With each new take, however, I was building confidence and mastering new skills. I now know how to work the FiLMiC Pro app, do the lighting, position the camera and have managed to shoot these films all by myself.

I couldn’t have done this a few weeks ago. Like so many things in life, it has been a process of putting one foot in front of the other, even when things continue to go wrong.

The video explains the reasons I am doing the seminar and the process of speaking intelligently into a camera for an extended period of time is a little more difficult than I imagined. It has imbued me with a whole new respect for Hollywood. I once read that movies would be nothing without the film editors and I now understand why.

After waiting for quite some time, there seemed to be a clearing in the noise outside so I began filming again. Of course, a rather large fly made his way into the room, commencing an all out, high speed reconnaissance of the area around the camera. These microphones pick up every little sound, so I had to stop and go on a fly hunt.

Once the fly had been eliminated, as if on cue, I pushed record and another round of mowers fired up, as well as a symphony of neighborhood dogs barking to one another.

I considered giving up but instead retreated for a while to wait them all out.

An hour later, I managed to record what I thought to be a nearly perfect video and, just as I was saying the closing words, the damn camera shut off the recording, and flashed the message, “NOT ENOUGH SPACE” to store the video. There were literally three or four words to finish up this four minute sequence {very big sigh.} I checked to see if I might be able to edit the end, but no, there will be no editing of this version. Maybe in Hollywood, but not here in my living room.

Back to ground zero. Not one to accept defeat, I stepped up to my spot, faced the camera again and pushed record. Wouldn’t you know it, the mow and blow team were now in my backyard. The Universe must be trying to tell me something.

Tomorrow is always another day.

← The Mighty Surrender: Embracing What We Know
Life Through The Lens Of Radical Forgiveness →